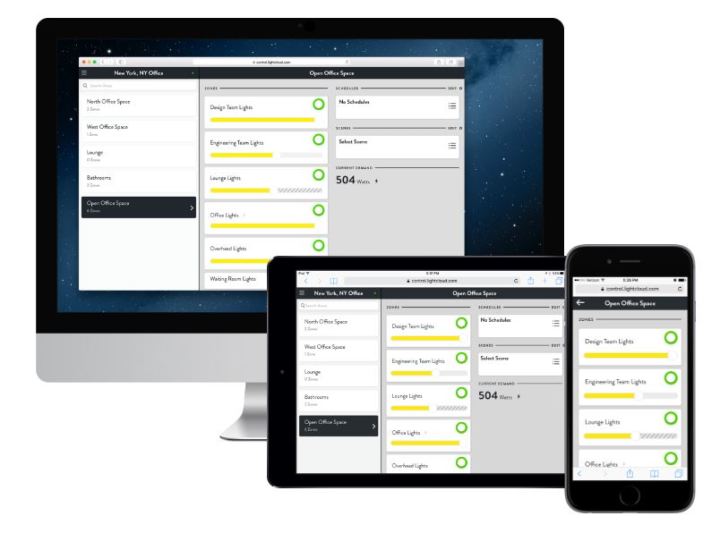 An interesting new lighting control system called Lightcloud from RAB Lighting  was just launched.  They promote it as a “ground up” system design and I can see why.  I don’t normally review specific manufacturers product launches (especially since I work for the competition), but I want to highlight a few features in this product that catch my eye and that I hope represent trends for the industry overall:

First – 277v support.  European and Asian companies just don’t get how important that voltage standard is for commercial projects in the US, instead relying on consumer electronics standards of 100-240v.  Even the gateway and the touch screen controller are direct-connection 120-277VAC!

Second – simple integration with light fixtures.  The controller for the lights is a tiny black tube designed explicitly for screwing into a standard North American junction box , which makes complete sense for how lighting systems are put together in the United States.  The device is basically a relay switch, but with optional 0-10v dimming, to ensure simple backward compatibility with the huge range of legacy 0-10v ballasts, drivers, dimmers, etc.  Since it is relay switch, it controls circuits, not just individual fixtures, which makes it much cheaper to install or retrofit for groups of lights.

Third – independent cloud connection.  The gateway box connects to the cloud via a private 3G cellular connection, not an Ethernet connection. Anyone outside of the construction industry routinely takes for granted that an Internet connection can be “easily” installed in a building.  It can’t – because of coordination issues between trades, between the building owner, operator and tenants, and because of pain-in-the-ass IT departments of any large companies.  RAB skips that whole hassle with the 3G connection.  Plus, brilliantly, it locks the system to RAB’s oversight indefinitely.

Fourth – simplicity.  Even though this is a cloud-connected  system, it is designed to control lights.  Period.  No other frivolous bells-and-whistles “Internet of Things” nonsense.  Only six devices make up the system – gateway, controller, wall dimmer, occupancy sensor, solar-operated daylight sensor, and permanent architectural-grade touch screen interface.  That covers all the basics of typical commercial lighting installations in the US, without annoying specialty hardware pieces or “required accessories for the power supplies for your controller interface for your light switch” garbage.

Fifth – putting the “service” into “software-as-a-service”. The software is all cloud-delivered via apps.  Most companies would think that is easy enough, but I also find it interesting how many times RAB says to simply call them to help change the lighting scenes. Wow…that’s service, if only they can deliver on the promise.

If this is the way lighting control systems are headed, this is a good thing for the industry as a whole.  On the one hand, too many lighting controls companies are stuck in the past, with complicated lines of proprietary hardware that are just too hard to specify, commission or use.  But they can’t write-down the sunk costs of their old lines so they continue to glom-on new “capabilities” to the old systems.  On the other hand, we have a bunch of Silicon-Valley wannabes dumping IoT promises into the market without having any clue of the basics of what the market needs.  If you can’t handle a customer’s basic needs, you’ll never reach the level of their possible wants.  It is similar to my comment on the Gecko Switch – start with solving real problems first, rather then inventing new problems to dump on your customers.