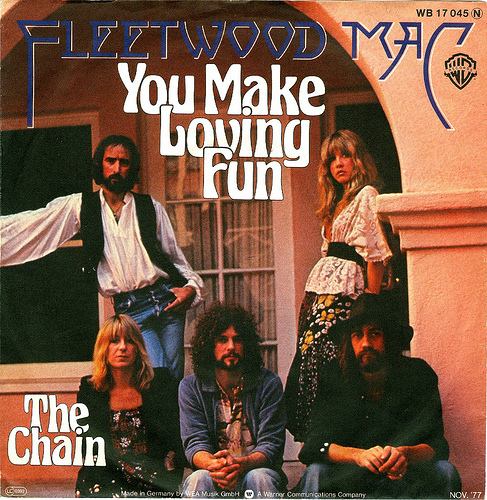 I’ve always liked the groovy Fleetwood Mac song “You Make Loving Fun“…but now I have a whole extra reason to like it:  The song was actually inspired by an affair between Fleetwood Mac’s keyboardist Christine McVie and their lighting designer Curry Grant (who now apparently is a VP at PRG).

This is what Mick wrote about Curry:
John and Chris were only nominally married at that point. Actually, she’d been seeing our lighting director, Curry Grant, in secret while we were on the road. John suspected something was going on. He’d say to me, “He’s doing her, you know.” And I’d say, “No, no, no, John, it’s all in your mind.” Soon Curry started having trouble with the rest of the crew; they saw what was happening and didn’t like it. It got so Curry couldn’t ride in the van with the rest of them. Colonel Courage would berate the readies, and they’d say they hated Curry ’cause he was messing around with Christine. So the colonel and I confronted her, and she told us it was true. John was very upset, and we fired Curry because it was disrupting the band. Chris was told it had to be that way, and she understood.

Maybe the IALD might consider dropping their stuffy slogan and try this on for size:  “Hire a lighting designer — We make loving fun!”

Here is a great live version of the song…cheers!