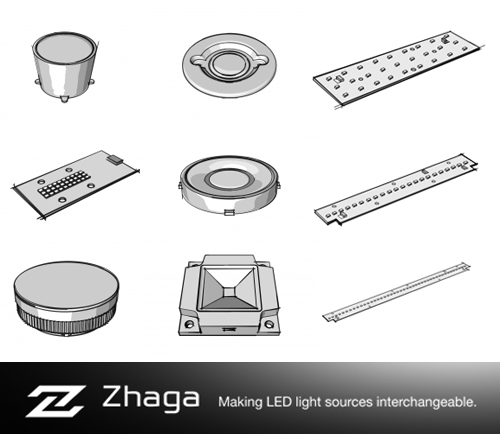 In a recent issue of LEDsMagazine, an excellent pro-Zhaga piece written by Philips’ very own Menno Treffers, who is the General Secretary of the Consortium.  Menno is the Senior Director of Standardization at Philips, and not just specifically lighting (he also is the Chairman of the “Qi” wireless charging standard for consumer products).  Menno has been an excellent leader in organizing Zhaga as a neutral and open consortium, particularly given the demanding legal requirements to get such a group off-the-ground.

Having participated in Zhaga directly when I worked at Micron’s fledgling LED division, I’m a big proponent of the industry’s need for LED engine standardization.  I’m hoping to see far more pro-Zhaga communications in the near future from additional companies.  The communications and promotions work-groups within Zhaga have been slow to start, but of course, they had to wait until the actual specifications were (mostly) complete.

Many companies in the lighting industry are struggling with profitability in the transition to LED-based lighting. Luminaire manufacturers are seeing their R&D costs and stock levels increasing. They are writing off increasing quantities of obsolete stock, and are facing increasing risk of quality problems in the field. Zhaga standards can help with these issues and accelerate the adoption of solid-state lighting (SSL).

I spoke with a number of lighting manufacturers who had increased their R&D spending from around 3% of sales in 2006, when they were designing luminaires with conventional light sources only, to 6% of sales last year, when 80% of the total went on developing LED luminaires.

Such a high level of R&D spending does not look sustainable for luminaire manufacturers. Costs will have to go down – not just R&D costs, but also the cost of stock, stock obsolescence, and the cost of quality. Why has the R&D cost increased so much? Partly because LEDs change faster than luminaires, and partly because it is challenging to make reliable luminaires that deliver the expected long lifetime.

Most luminaire companies already use modular architectures – this is the only way to develop and maintain a broad portfolio of luminaires. While it may be obvious to separate the LED technology, the choice of make vs buy is less straightforward. Making your own PCB with LEDs is attractive, and the cost is lower than buying the equivalent off-the-shelf module. This will get you luminaires with minimum bill-of-materials (BOM) cost. On the other hand, proprietary LED modules are a burden for the R&D department, and the design and maintenance of the modules will increase your R&D cost.

Designing your own LED modules has other pitfalls. It is easy to get started, but soon you will need variants for other color temperatures, light levels and CRI values. Before you know it the R&D department has doubled its number of engineers.

Are you better off buying LED modules? Not necessarily. They are more expensive, and their integration into the luminaire still needs careful engineering to make the luminaire reliable. Furthermore, a module that is competitive today may be outdated, or even unavailable, a year from now. The dilemma seems to be whether you should reduce the R&D cost or the BOM cost. And what is the effect on your stock levels, the risk of obsolete stock, and the diversity of your luminaire product portfolio?

Luminaire manufacturers benefit from interchangeability because they can more easily switch from one supplier to another. The availability of a second-source supplier reduces risk. Not only will interchangeable LED light engines be more competitive, they are less vulnerable to supply issues, and that helps reduce stock levels and the risk of obsolescence. A subtle benefit is that interchangeable LED light engines will offer more choice in terms of CRI, CCT, lumen levels, lifetime, color stability, etc. This offers luminaire manufacturers the possibility to play with different performance/price levels in their luminaire portfolio without increasing their R&D costs.

The impact of Zhaga is already visible. For example, suppliers of linear indoor modules have started to offer products with the mechanical dimensions and fixation specified in Zhaga Book 7, even though that specification has not been published yet. Even if you choose to design and manufacture your own linear modules, it now makes sense to make them compatible with Zhaga Book 7. You may want to purchase these modules later from an external supplier.

About the Author
Menno Treffers is General Secretary of the Zhaga Consortium.