Disney Parks’ Blog just released a video tour of the soon-to-be-opened Maurice’s Cottage character meet-and-greet attraction at the Magic Kingdom’s new Fantasyland Expansion.  The video starts with a seemingly innocent construction site tour…and then WHAMMO…one of the most stunning special effects I’ve ever seen.  What looks like a plain-old wall mirror suddenly expands into a full door that guests walk through.  Even better…the video is shot in a single continuous take in HD video, so you can study the whole effect…no distracting cuts or other gimmicks to hide anything.  The effect is dazzling.  And I think I’ve figured out how its done:

1. Here is the basic mirror when you first encounter it: 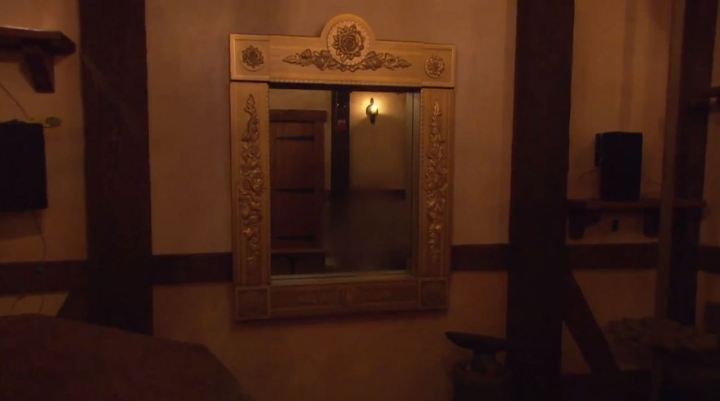 2. When the portal effect starts, I think you are seeing three primary lighting effects.  First, a front projection puts the magic “crackle” effects on the frame.  Second, the mirror itself is not a mirror:  It is a rear-projection glass screen that is actually split in half.  The view into the mirror is actually a rear-projection effect.  Why does the glass look like a mirror then before the effect?  Simple:  The room beyond is kept dark, so the glass acts as a mirror reflecting the brighter room you are standing in.  Third, it looks like there might be some built-in fiber optic effects (a la the famous Tower of Terror entrance sign).  The fiber effects seem to be in the parts of the frame where the extrusions are not sliding in and out….although these highlights might be just well-executed 3D-mapped video effects.

3. The frame starts to expand.  If you look carefully, you can see the frame is split into thirds.  The middle third is slightly fatter, and the outer thirds are extrusions concealed within.  So the outer thirds are pulled out from the middle third.  If you watch very carefully, you can see the bottom frame fully retracts down into the floor to completely disappear and prevent any tripping hazard.

4. The two halves of the mirror retract open (I’m guessing there must be a visible seam down the middle of the mirror).  The Imagineers use a trick of changing-forced-perspective in the animation to make it look like the doors swing backwards, but in the above screen-cap you can clearly see the glass panels retracting and sliding to the sides, not swinging.

One thing still baffles me:  I can’t see any visible seams in the wall below the mirror.  The video is just a little too dark.  It might be one solid panel that also retracts down into the floor, but I can’t see any evidence of this in the wall panels flanking the full door opening.  I know it must be “hiding in plain sight”, but it is still amazing that the trick is so hidden.

BRAVO Imagineering!  I give you my highest complement:  That’s how Walt would have done it if he were around today!