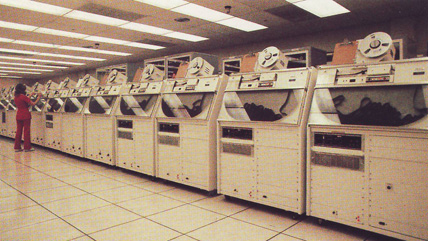 What in the world are the machines shown above?

In this blog we will cover many cutting-edge control technologies.  But to appreciate how much computing power is now so commonly and cheaply available, sometimes you need to look back.

Disney was a pioneer in advanced show control and automation technologies.  The lighting cues and robots in the attractions were controlled via audio tones (hence the term “audio-animatronics”) that triggered analogue relays.

Back when Walt Disney World opened in 1971, all of the most advanced attractions were controlled via the “binloop” tape machines picture above.  Each machine played 14 tracks of analogue audio simultaneously on 1″ wide magnetic tape, including the audio tracks and the tone control tracks, which kept everything in sync.  If they needed more tracks, they synchronized more machines.  The first four machines in the image above are controlling the entire “It’s A Small World” ride, the next six machines are controlling the “Haunted Mansion”.

But since the rides repeated endlessly, so did the tapes.  So they created tape playback machines that had a never-ending circular loop of tape, that cycled the excess tape down into a physical storage bin.  All of that went digital long ago, but the name hangs on (see zoom below). 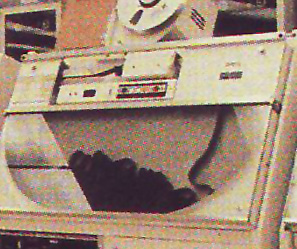 Nowadays, if you are seeking state-of-the-art show control technology for blockbuster theme park attractions, Alcorn McBride is the place to look.

Alcorn McBride makes state of the art, digital “bin-loop” products.  They offer a range of super-professional-grade audio, video and lighting show-control gear, used throughout all the major theme parks in nearly all of the most famous attractions.  Why have you never heard of them?  Because Disney and Universal don’t like suppliers to use them in their advertising…in fact, Disney contractually prohibits it.

Need a master show control for the cute furry robots being attacked by the ghost-pirates? No problem.

Steve Alcorn was a Disney Imagineer during the construction of Epcot Center (and recently wrote a book about it).  Check out their site if you want a peek into how your favorite attractions are controlled.